Home » The History of Window Glass 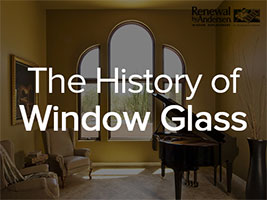 Technically speaking, the Romans made window glass panes from “flat glass” as early as the first century. The panes were small, not transparent, and have since been discovered at sites in Rome, Britain, and Pompeii.

Early in the 17th century, the first window glass was manufactured in Britain. It was broadsheet glass, a lengthy balloon of glass that was blown, and then both ends of the glass were removed, leaving a cylinder to be split and flattened.

Glass-Making Arrives in the Colonies

It also was in the early 17th century that English settlers brought glass-making to America, where the first glass factory was opened in Jamestown, Virginia. The manufacturing process consisted of a bubble of glass that was flattened and reheated before being cut into shapes—a cheap and efficient way to make window glass.

Next came the crown glass process, in which a sphere of molten glass was blown, opened at the end of the blowpipe, then spun into a circular sheet. Despite imperfections that included ripples and circles, crown glass was still better than the broadsheet. In 1834, the Germans introduced a cylinder method of manufacturing in which technological advances produced even larger sheets of quality glass.

In 1903, laminated glass was invented quite accidentally by Edouard Benedictus, a French chemist whose glass flask dropped to the floor and shattered but did not break. Since then, inserting a thin plastic film between two sheets of glass has made larger windows safer.

Late in the 20th Century, in efforts to reduce fuel bills by upgrading the energy efficiency of windows, double-glazing was developed by placing moisture absorbent spacers between two panes of glass to create the insulated airspace. Today, most glazing glass is manufactured by a process in which molten glass is floated on a bed of molten tin as the upper surface is polished with pressurized nitrogen.

At Renewal by Andersen, our window replacement is manufactured in the USA to exact specifications for your home. As part of our comprehensive process, we have taken glass to the next level with customized windows made using the most state-of-the-art materials. Please call us at (916) 525-7711 to speak to one of our representatives.

" I was able to keep the character of my older home with divided light windows. The installation process went smoothly and the team of master installers was fast and courteous. This is the second home we have used Renewal by Andersen for replacement windows and we would highly recommend this company."

Our Renewal by Andersen sales representative offer a variety of attractive financing options to help you fit your window and patio door replacement project within your budget. Some financing programs include:

© 2020 Renewal by Andersen of Sacramento